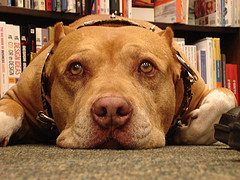 Those of you who watch Cesar Millan’s television show are familiar with the concept of dominance. Fifteen years ago, most dogs were trained using this concept, which led to training based on force and submission. As Dr. Sophia Yin, DVM, MS explains on her website: Traditional training techniques are based on the idea that we must become the dominant leader and rule our pets the way a wolf would rule a pack. That is, they assume most misbehavior in dogs is due to the dog trying to be dominant and then they employ techniques that they think a wolf (since dogs are seen as having a social structure similar to wolves) would perform in a wolf pack. Since then, however, research on both canine learning and the social structure of wolves has led to new, scientifically-based methods of dog training that differ from those used by The Dog Whisperer and other traditional trainers[…]

Read the rest in our Newsletter Archives