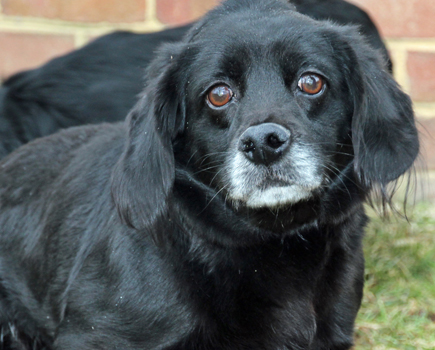 He is a 7-year-old Cocker Spaniel mix and a foster dog with Oldies But Goodies Cocker Spaniel Rescue. Rex and 15 of his dog friends were living on a farm in West Virginia and after a family tragedy, the rescue was called to help rehome the dogs.

Many of these dogs are people-fearful. If I had to guess, I’d say they were raised by the other dogs on the property and didn’t have the socialization with people that puppies need to be well-adjusted adult dogs.

My OBG Cocker Rescue alum, Titania, also has issues with fear around new people, so I volunteered to foster Rex and help him in his rehabilitation in the hopes that we can place him in a forever home.

The only real “bonus” to Rex’s initial behaviors was that he was not a fear-biter. However, I knew to always treat him as if he *could* bite, because any dog can bite when pushed beyond their tolerance level.

Rex’s progress is thanks to several people beyond our immediate family.

Here’s a timeline of Rex’s progress: 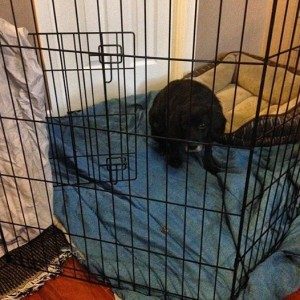 3/13 – We bring home Rex and set him up a habitat with a covered crate. We open up the door behind him so he can potty on pee pads in our bathroom since he’s too afraid to go outside. Eventually we opened up the bathroom so he could go into our bedroom, which resulted in Rex’s next choice… 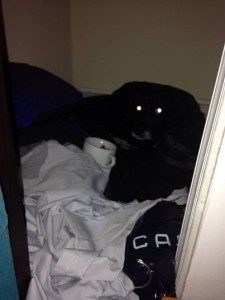 I had to move Rex from the closet because he wasn’t going to make any progress at all if he hid 24/7. For the next few days, he lives in his habitat. He breaks out of the habitat at night and paces around the house. We let him do it, even though it involves him relieving himself on the floors, because it’s giving him the opportunity to explore without the fear of running into any people. 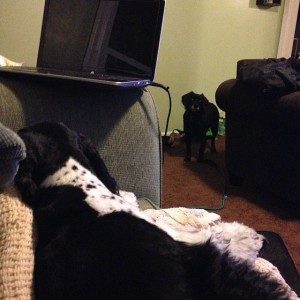 3/20 – Rex pops his head into the living room when we’re in it, and thinks about staying there, but then will go back around the corner into the kitchen.

At this point for Rex, the “reward” for his behavior is that we do not look at him or engage with him in any way. Since he’s only eating when nobody is watching, it wouldn’t work for us to toss treats to him at this point. We want him to realize that he can come into the living room and nothing bad will happen. In fact, NOTHING will happen! 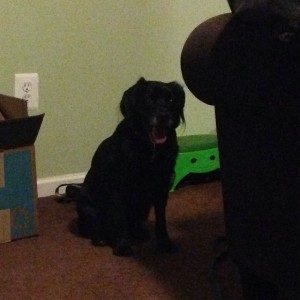 3/21 – Rex is curious. He will come out and peek at people and then run back to his safe place. We just ignore him and let him test the waters. I was making dog meatballs in the evening and he was curious about all the delicious smells in the kitchen. I tossed a piece 10 ft away from me and he crept up and ate it!

3/27 – This past week, there are days when he’s very curious and will follow my dog and me around the house or pop his head into the living room to watch us watching TV. But there are also days when he just wants to curl up in his crate and not engage with us. So we’ve been letting him set the pace as much as possible.

This morning, I made a trail of rotisserie chicken pieces from his crate to the kitchen and then half-hid myself around a corner. Watched him come out and eat one piece, then the next, then the next. He peeked up and saw me and was a little spooked, but then came back for the biggest piece that was a few feet away.

4/4 – Rex eats his entire breakfast with me in the room! 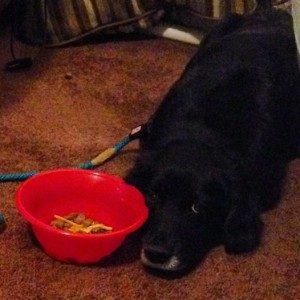 (Before, he would wait until everyone left, no matter how hungry he was.)

4/4 – Rex licks my hand! There was kielbasa in it. He wasn’t quite brave enough to eat the kielbasa from my hand, tho.

4/6 – Rex ate two pieces of kielbasa from my hand. Rex eats his dinner in the living room.

4/11 – Rex won’t eat from my hand unless it’s a super high-value item, but allows me to touch him while he eats. We worked up to this. At first I left the kibble in front of him and pet and then took my hand out. Then I slowly worked toward leaving my hand closer. And closer. And then left my fingertips touching him. Finally he was able to eat with me touching! (Video below.)

Progress starts to roll around quicker now that Rex is reliably seeing people as a source of food, not fear. 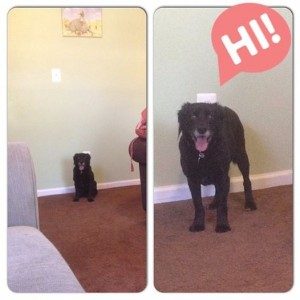 4/12 – Rex checks out the people from the edge of the living room.

4/13 – I rearranged some furniture in the back room and set Rex back a little bit. He’s more skittish, but still trying to follow me around the house. 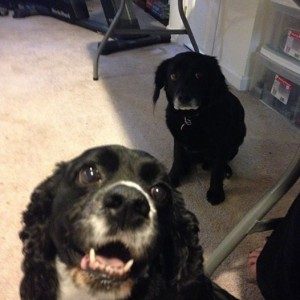 4/15 – 90% of the food Rex ate today came directly from my hand. Rex is also choosing to sit closer to me. (Picture is without zoom! Photobomb by my dog, Titania.)

4/15 – I was in bed, about to fall asleep, when I heard a chewing sound. My first thought was that my dog had stolen the bully stick from Rex’s crate, which I have had in there since Day 1. But I checked and my dog was sound asleep at my feet. So I flipped on the lights and snapped a picture. 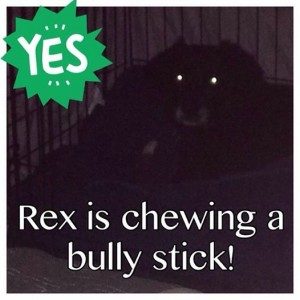 Dogs will not engage in chewing behavior unless they’re feeling comfortable enough in their surroundings. HUGE STEP for Rex!

4/16 – Rex starts a little clicker training. He’s not brave enough to target my hand yet, so I clicked and treated for eye contact. I used my quiet clicker and after a few times, I could see his ears perk up every time he heard the click. Click means treat!

4/18 – Rex did something this morning that approximated begging! The pups were in the kitchen, so I thought I’d see if I could get Rex to eat somewhere new. So I took a chicken cookie out of the fridge and broke it into pieces and gave one to Rex and one to Titania. Rex ate it! And then he stood there and made eye contact for a long moment. So I gave him more. More eye contact. And despite my opening the fridge to get more cookies and closing it again, he stayed in the kitchen and totally kept eating.

4/20 – Rex chose to sit at the edge of the living room to watch us watching TV.

4/23 – Rex chose to sit in the living room with my boyfriend when I was not around.

4/24 – Rex is choosing to be in the living room with the people more often than not. 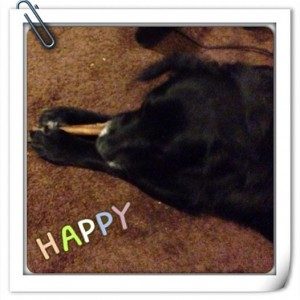 4/27 – Rex takes his bully stick from the crate in the bedroom and brings it into the living room so he can chew it on the floor by the couch (where I am watching TV).

5/1 – An amazing sight: REX’S TAIL! This morning when I woke up, he was standing at the bedroom door with my dog and his tail was up and even wagging a little bit. AMAZING. I wish I had a picture, but it was too dark to snap one. 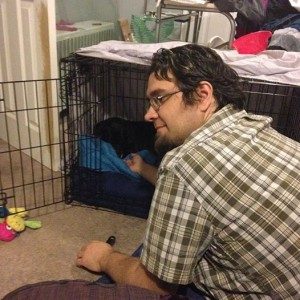 Rex is doing extremely well, but he has a long way to go before he is anywhere near being a “normal” dog. Working with a fearful dog is all about celebrating the baby steps and making sure that the dog feels safe at all times. Sure, there will be times when they’ll be at the edge of their comfort zone, but allowing the dog a safe place to retreat and regroup is key to the rehabilitation process.

Right now, Rex is asleep on the living room floor next to me. He is on his side and 100% zonked out, breathing very slowly and deeply. This is a totally huge deal and I can’t help grinning from ear to ear watching him sleep. He feels safe enough to sleep deeply while I am not a foot away. He’s one special boy and he’s getting better and better every day!

Do You Have a Fearful Dog?

We have two classes suitable for the fearful dog. Our Fearful Dog Class is currently full for June, but you can join the waitlist to be notified when we offer the next session. We also have a Confidence Building Class for dogs that are just a little shy. We’ll be announcing new dates for this class soon, so join the waitlist to be emailed as soon as we set a date!

We will discuss strategies for overcoming your dog’s fear of people, inside and outside of the home. Fear of strangers, children, veterinarians, groomers, and family members will all be covered. Learn to identify when your dog is moving into a fearful state; help your dog in that moment; and work toward alleviating your dog’s fears more permanently.

NOTE: This workshop is on a Sunday and 1/2 hour earlier than our usual time.

Please click to register in advance so we have enough handouts for everyone. Thanks! 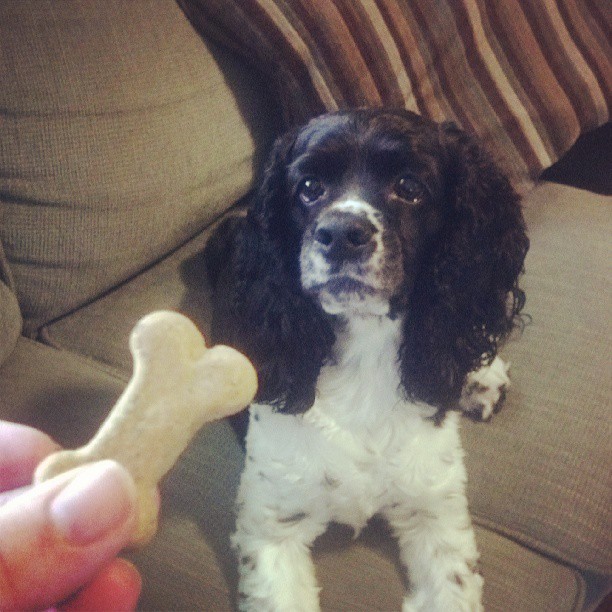 Your Dog’s Friend has partnered with a monthly dog goodies delivery service called BarkBox. For every new BarkBox customer that uses the code YDFBBX1, our Foster Dog Alliance program gets a $10 donation. But that’s not all! You also get $10 off your first BarkBox.

YDF student, Titania the Cocker Spaniel, would like to tell you a little about what she received in her BarkBox this month (with a little help from her Mom): 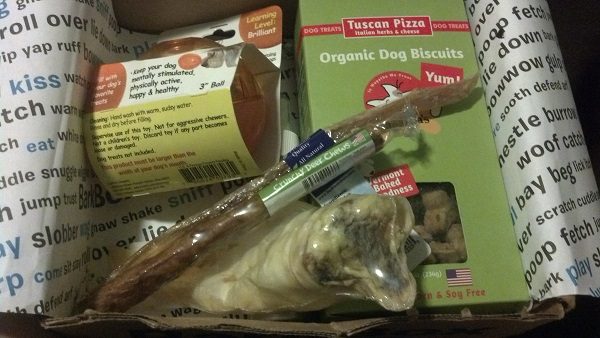 Titania says: So many smells when Mama opened the box this month! I smelled cheese and deer and beef. No duck though. There was duck last month and it was soooooo good.

Mom says: I love BarkBox’s presentation. The wrapping paper folds over the goodies so it’s like opening a present every month! There’s also a card that tells you a bit about each product along with a link to the vendor’s website in case your dog falls in love with something and you need more.

Here’s a quick video I shot with my cell phone of Titania trying out her new treat ball for the first time. Notice that at first, she’s unsure of what to do with it… but once she notices that it pays in treats, she’s on board! 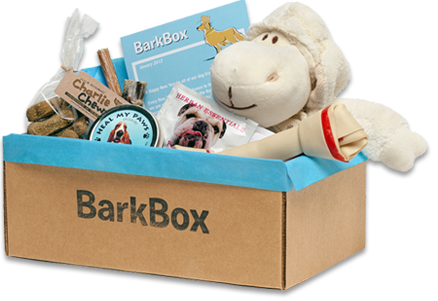